In the casting of light metals, aluminum, and aluminum alloys, it has been a common practice to melt the metal in open hearth or other type melting furnaces that are heated by the burning of conventional fuels. In preparing the metal for casting, the charges of metal and desired alloying constituents are generally added to the melting furnace to be melted, and thereafter the molten metal is transferred to a holding furnace where close control of both the composition and the temperature of the molten metal may be maintained. Thereafter, the molten metal may be transferred by suitable means from the holding furnace to either a transfer crucible or directly to the pouring tundish of a casting machine.

Molten metal transfers with launder transfer system from the receptacle to the receptacle and finally to the casting machine, hydrogen gas is generated by the reaction of the metal with any moisture existing throughout the system. Moreover, oxides of the metal and its alloying constituents may be formed and dispersed throughout the molten metal. Consequently, in the casting of metal, e.g., in a continuous process, the cast product may contain a large proportion of the hydrogen gas in solution in the solid metal, as well as small occluded oxide particles which tend to nucleate about hydrogen-filled voids within the solidified metal. 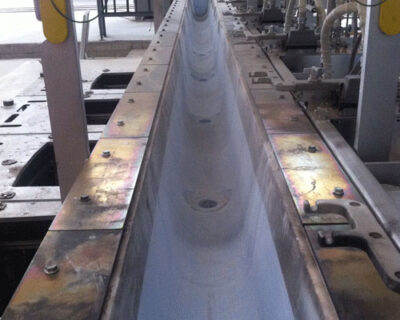 The presence of hydrogen gas and finely divided particles within the cast product is, of course, a serious problem inasmuch as the final product worked from the cast bar, such as continuously-formed rod and wire, will have poor grain structure and, consequently, reduced mechanical properties. Moreover, when the product is used as an electrical conductor, the existence of undesirable constituents may seriously reduce the electrical conductivity of the product. The prior art has, therefore, proposed several methods for fluxing molten metals with inert gases to reduce the hydrogen content thereof, as well as for filtering the molten metal through refractory filter media to remove finely divided solid particles therefrom.

Conventionally, molten metals have been batch fluxed by treating the entire body of the melt in the holding furnace or in an intermediate receptacle, such as a ladle. However, this method has not been totally satisfactory because it is time-consuming and requires large quantities of fluxing gas. Moreover, large quantities of the hydrogen gas generally remain in the cast article even after the batch fluxing due, primarily, to reabsorption of the hydrogen gas and further generation thereof by reaction of the metal with moisture that may be present throughout the system. Moreover, while prior art methods of filtering molten metals through refractory filter media to remove finely-divided solid particles have been generally satisfactory in this respect, they have not been beneficial in appreciably reducing the gas content of molten metal.