Degassing Refining can remove the gas and impurities in the liquid aluminum. The aluminum surface has a layer of uneven thickness of oxide film, sometimes also adsorbed water, mixed with ash and sand, sticky oil, coated with paint, and so on. During melting, aluminum is further oxidized in high-temperature environment, the thickness of oxide film increases, and reacts with moisture in the atmosphere to generate alumina and hydrogen, which increases the content of oxidation inclusions and gases. Therefore, after melting, the online degassing unit and CFF filtering box can remove the impurities and gases inside the liquid aluminum. 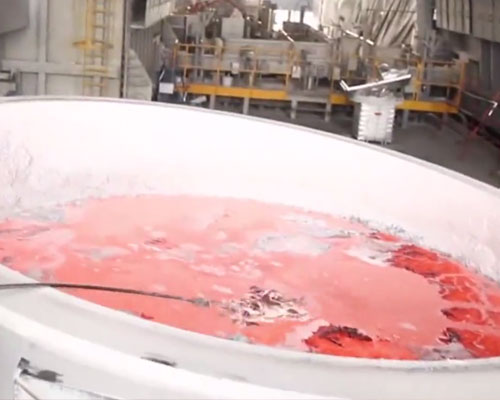 In the process of smelting aluminum alloy, there are many kinds of gases, such as H2, CO2, Co, N2, cha (hydrocarbon), H2O, and O2, which are brought in from the atmosphere, fuel, furnace charge, refractory, flux, casting tools, etc. But only those gases which are easy to decompose into atoms can be dissolved into liquid aluminum in large quantities. Specifically, 80 ~ 90% of the gas dissolved in liquid aluminum is hydrogen. Therefore, the gas content in aluminum alloy mainly refers to the hydrogen content.

Among the compounds formed by the chemical reaction of liquid aluminum with oxygen, nitrogen, sulfur, carbon and other elements and other inclusions mixed in, the oxidation inclusion (Al2O3) causes the most serious metal pollution. Generally, the total amount of oxide inclusions in ingot is 0.0029 ~ 0.02.

The requirements for the purity of aluminum alloy melt are generally due to different varieties and uses. Generally, the hydrogen content is required to be less than 0.2ml/100gal, but it should be less than 0.lml/100gal for aviation materials with special requirements. It is difficult to have quantitative requirements for non-metallic inclusions because they can not be accurately quantified.