The degassing effect of the aluminum fluxes is mainly manifested in three aspects:

1. Remove part of the complex hydrogen absorbed by the oxidized inclusions.
2. When the refining flux interacts with the melt, a gaseous product is formed to carry out diffusion and hydrogen removal.
3. Since the oxide film on the surface of the melt is dissolved, it becomes easy for the dissolved atomic hydrogen to diffuse into the atmosphere. 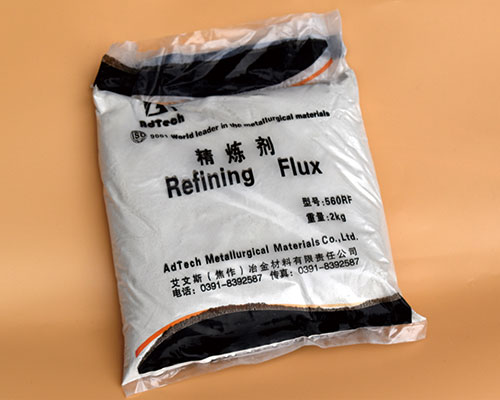 However, the degassing effect of the flux is limited. Under the production conditions, its hydrogen content can only be reduced to the level of 0.2-0.25mL/100gAl. Most aluminum foundries use online degassing devices for further purification.

The slag removal ability of the aluminum fluxes is determined by fluxes with the adsorption and dissolution of the oxidized inclusions.

Obviously, the lower the interfacial tension between the flux and the non-metallic inclusions, the better the adsorption of the flux, and the greater the slag removal effect.

The dissolving effect is determined by the nature of the flux. Generally, when the molecular structure of the flux is similar to the substructure or chemical properties of certain oxides, mutual dissolution can occur at a certain temperature. For example, Al2O3 and Na3AlF6 with the same cation have a certain mutual solubility. However, in the normal refining temperature range of the aluminum melt, the amount of oxides dissolved in the flux is very small.

After the chemical reaction between the solvent and the melt, the product does not dissolve in the aluminum. When bubbles are precipitated on the metal-oxide boundary, the oxide film is promoted to separate from the metal, and the oxide film is transferred to the flux. At the same time, the bubbles also have the effect of flotation and slag removal.