The main function of aluminium smelter flux is to remove slag and gas, and is widely used in aluminum furnaces and foundries.

The slag removal ability of the aluminium smelter flux is determined by the adsorption and dissolution of the oxidized inclusions in the melt by the flux and the chemical interaction between the flux and the melt. 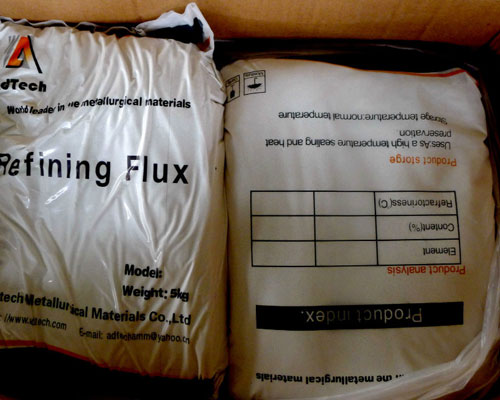 After the refining flux absorbs the oxidized inclusions in the melt, it can reduce the surface free energy of the system. Therefore, the flux has the ability to automatically adsorb oxidation inclusions, that is, the refining properties of the flux. This adsorption is the main reason for flux slag removal.

Generally, when the molecular structure of the fluxes is similar to the molecular structure or chemical properties of some oxides, mutual dissolution can occur at a certain temperature. For example, Al2O3 and Na3AI F6, MgO and MgCl2 with the same cation have a certain mutual solubility. However, in the normal refining temperature range of the aluminum melt, the amount of oxides dissolved in the flux is very small.

The degassing effect of the aluminium smelter flux is mainly manifested in three aspects:

First, as the complex is removed, part of the complex hydrogen absorbed by the oxidized impurities is removed. The second is that when the flux decomposes or interacts with the melt, it forms a gaseous product for diffusion and hydrogen removal. In addition, since the oxide film on the surface of the melt is dissolved, it becomes easy for the dissolved atomic hydrogen to diffuse into the atmosphere. However, the degassing effect of the flux is limited. Under production conditions, its hydrogen content can only drop to the level of 0.2-0.25 ml/100 g Al. The use of AdTech online degassing purification equipment can further reduce the hydrogen content in molten aluminum.