For aluminum and aluminum alloys, degassing and slagging with halogen compound flux is an important method. When using aluminium drossing flux, a large number of dispersed and fine flux droplets are formed in the melt. According to the law of dissolution equilibrium, the atomic hydrogen in the melt is brought to the liquid surface due to the diffusion of the flux droplets, thereby reducing the hydrogen content in the melt. In addition, halogen compounds (chlorine-containing salts) can be replaced at high temperatures to produce volatile AlCl3 with degassing effect. For example: ZnCl2, BCl3, MnCl2, etc. are all replaced by AlCl3 with aluminum. Elements such as Zn, B, Mn, etc., will enter aluminum and aluminum alloys. Some of these elements are useless and should be used. 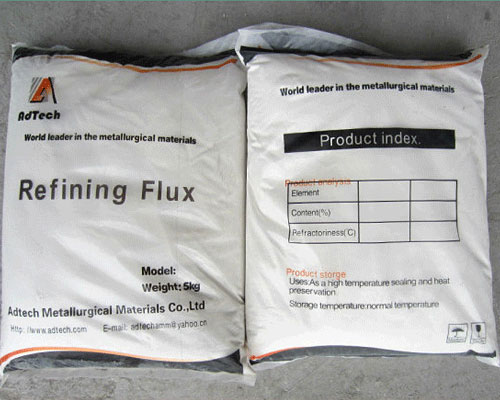 The aluminum drossing flux used for purification is a salt with low melting point, low density, low surface tension, high activity, and strong adsorption capacity for oxides. When using, put a small piece of flux into a lambda iron cage, then insert it into the bottom of the mixing furnace and stir it back and forth. After the flux is finished, take the iron cage and let it stand for 10 minutes. The scum on the surface can be cast. If necessary, the flux can also be sprinkled on the surface to cover it.