The main advantage of the ceramic filter for Greek Aluminium is to effectively eradicate the slag inclusions through the filter plate, and remove the micron-sized fine inclusions in the aluminum liquid. At the same time, because the ceramic filter plate filters out fine inclusions and reduces the effective number of crystal nuclei in the molten Greek aluminum, the molten aluminum nucleates and grows under relatively large supercooling conditions, the solidification time is shortened, and the structure is refined.

The ceramic filter for Greek Aluminium can also reduce the hydrogen content in the molten aluminum. Hydrogen atoms can be adsorbed on some oxidized inclusions, and the oxidized inclusions can become the core of bubble growth, so while filtering the inclusions, it also removes the gas. Through adsorption, the content of harmful elements (sodium, potassium) in the aluminum liquid can be removed. According to different customer requirements or on-site environmental conditions, selecting a molten metal filter plate suitable for ensuring product quality can effectively control slag inclusion. 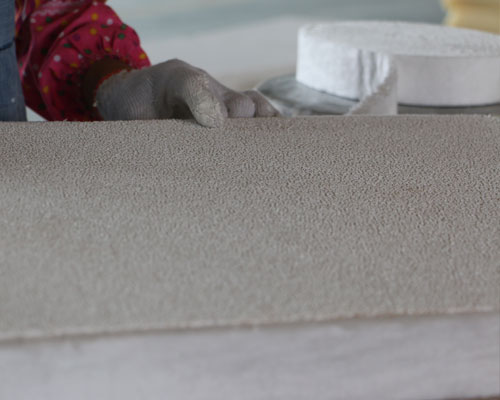 The slag removal outside the furnace is mainly done through ceramic filter plates. The ceramic filter plate has a multi-layer network and multi-dimensional through holes, and the holes are communicated with each other. When filtering, the molten aluminum carries inclusions and flows along the tortuous channels and pores. When it comes into contact with the foamed framework of the filter plate, it is directly intercepted, adsorbed, deposited, and so on. When the melt flows in the hole, the filter plate channel is curved, and the melt flowing through the channel changes the flow direction. Among them, the inclusions collide with the hole wall, and firmly adhere to the hole wall.

Greece has some of the largest bauxite mines in Europe.

The first step in the production of aluminum, the conversion of bauxite to alumina, requires a lot of energy and generates waste, but it is relatively simple, especially if the bauxite used is soluble in caustic soda. The second stage, the smelting stage, requires a lot of electricity to convert alumina into aluminum.

In such a multi-step metallurgical process, manufacturers tend to be vertically integrated by participating in all steps of the production process, because each step adds value.

Aluminium of Greece, a subsidiary of the Greek industrial group Mytilineos SA, promised that by 2030, all its electricity needs will shift from renewable energy to green energy.

The aluminum producer stated in a document submitted to the exchange that it had signed a power supply agreement with the Greek utility company Public power Corporation SA, and pointed out that this would be the last such agreement between the two companies. contract.

However, the agreement will last from the beginning of July 2021 to the end of 2023.

Evangelos G Mytilineos, Chairman and CEO of Mytilineos, said: “For us, after 2023, the long-established’Greek Aluminium’ factory has embarked on a new era, that is, a green and sustainable era, which is the first to realize the country. Climate goals and the European Green Agreement.