Degassing with Nitrogen has been gradually eliminated in the modern aluminum industry, fluxes are generally used together with nitrogen. 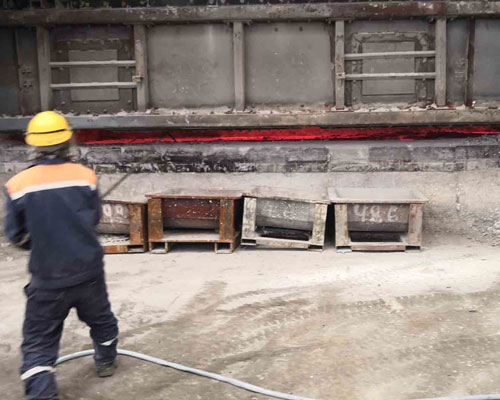 First, after nitrogen is blown into the melt, a large number of nitrogen bubbles are produced. On the contact surface of the bubble and the molten metal, there is only nitrogen in the bubble at the beginning, but due to the pressure, the hydrogen in the melt enters the nitrogen bubble, and the nitrogen bubble containing hydrogen rises to the liquid surface under the action of buoyancy. Ran into the atmosphere, thus taking away hydrogen from the metal. In order to ensure that the gas is fully discharged, the nitrogen bubbles that are blown in should be slowly raised during operation, and the contact area between the bubbles and the metal should be as large as possible. For this reason, the volume of the blown bubbles must be as small as possible. This will bring out a lot of gas. For the nitrogen to be blown in, one must be very pure and free of other gas impurities; the other is to contain the least amount of water. When nitrogen is used for refining, the degassing speed is slow, it is impossible to remove the gas in the metal, and the purification effect on non-metal impurities is very small. Fluxes are generally used together with nitrogen, which will increase the degassing effect

Due to the large area of ​​aeration in the molten aluminum furnace, the gas distribution is difficult to be uniform, the bubbles rise too fast, and the large amount of flux is used to cause bad working conditions and environmental consequences. In the process of recasting the purified molten aluminum, an oxide film is formed due to the rapid destruction of molten aluminum, which increases the possibility of slag inclusion in the ingot. Therefore, in recent years, in the continuous casting technology of aluminum and aluminum alloys, the purification treatment of aluminum liquid has appeared in the combination of filtration and air blowing outside the furnace. The purified molten aluminum can be cast.