Gas purification is a main primary aluminum purification method. The gas used is chlorine, nitrogen or a mixture of chlorine and nitrogen.

Chlorine purification. In the chlorination method, when the fluorine gas is passed into the aluminum liquid, many abnormally small bubbles are generated and mixed in the aluminum liquid. The hydrogen dissolved in the molten aluminum and some mechanical inclusions are adsorbed on the bubbles and are discharged as the bubbles rise to the surface of the molten aluminum. When chlorine is introduced, some elements that are more negatively charged than aluminum can be chlorinated, such as calcium, sodium, magnesium, etc., which are separated into corresponding chlorides due to the introduction of chlorine. Therefore, the chlorination method is a very effective primary aluminum purification method. The amount of chlorine gas is 500~700g per ton of aluminum, but because chlorine gas is toxic and expensive, in order to avoid air pollution and reduce the cost of aluminum ingot production, the modern aluminum industry has gradually abolished the chlorination method and changed it to inert gas- Nitrogen purification method. 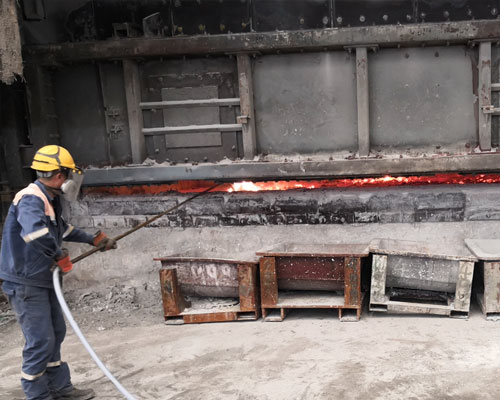 Mixed gas purification. A mixture of chlorine and nitrogen is used to purify molten aluminum. Its role is to remove hydrogen and separate oxides on the one hand, and remove some metal impurities (such as Mg) in aluminum on the other. The commonly used composition is 90% nitrogen + 10 chlorine. There are also 10% chlorine mixed with 10% carbon dioxide + 80% nitrogen. This effect is better, carbon dioxide can diffuse chlorine and nitrogen well, which can shorten the operation time.