Degassing With Inert Gas is widely used in the metal casting process. The melt and dissolved hydrogen do not react with chemical reactions and do not dissolve in aluminum, such as nitrogen and argon, usually using nitrogen. When the inert gas is blown into the melt, many fine bubbles are formed. When the bubbles pass through the melt, they meet with the hydrogen and oxide inclusions in the melt. The hydrogen and inclusions are adsorbed on the surface of the bubbles, and float up to the surface of the melt with the bubbles. Our rotary degassing unit does the metal degassing with nitrogen. There are five factors affecting the degassing effect with Nitrogen. 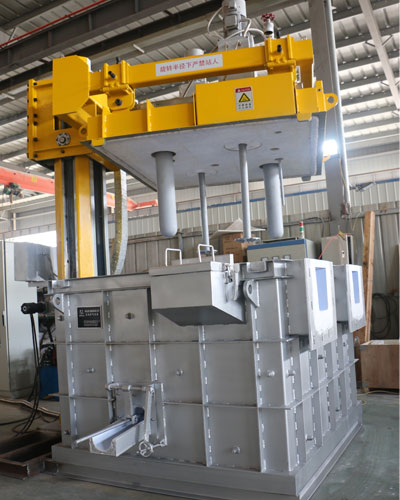 The nature of nitrogen. The density and viscosity of the nitrogen, the wettability of the inclusions and the heat capacity have an impact on the refining effect. The greater the gas density and the greater the viscosity, the slower the floating speed in the melt and the longer the residence time, which is beneficial to the improvement refining effect. However, the smaller the gas density, the larger the gas volume per unit weight and the larger the contact area with the melt, which is also conducive to improving the refining effect. Someone pointed out after experimentation: It is not the weight of refined gas that plays a decisive role in the degassing process, but its volume and degree of dispersion in the melt. The better the wetting performance of the gas to the inclusions, the stronger the flotation ability of the gas. The heat capacity affects the refining effect by affecting the melt temperature.

The purity of the nitrogen. The purity of the inert gas mainly refers to the degree of oxygen and moisture contained in the inert gas. The higher the oxygen and water content in the inert gas, the worse the refining effect. Because oxygen and water vapor enter the melt with the refined gas, they will chemically react with the melt, forming an oxide film on the surface of the bubble, and increasing the hydrogen partial pressure in the bubble. This will not only greatly extend the diffusion process of hydrogen removal, but also make the melt The content of oxidized impurities in the body increases. When the water vapor and oxygen in the inert gas exceed a certain value, they can only play a refining role, and even cause hydrogen absorption process in the melt, causing more serious pollution.

The size of the bubbles. The smaller the bubble size, the better the degassing effect. Because the smaller the bubble, the more bubbles caused by the same volume of gas, and the larger the surface area. And the slower the floating speed in the aluminum melt, the longer the contact time with the melt.

The uniformity of contact between bubbles and melt. The fuller and more uniform the contact, the better the refining effect. Because air blowing refining is based on partial pressure difference diffusion degassing and flotation slag removal, only the area in contact with the refined gas can have refining effect. In order to increase the chance of contact, it is best to use online refining and filtration combined treatment to refine the melt. In the case of refining in the furnace, the refiner should be allowed to move smoothly along the bottom of the furnace to prevent dead corners.