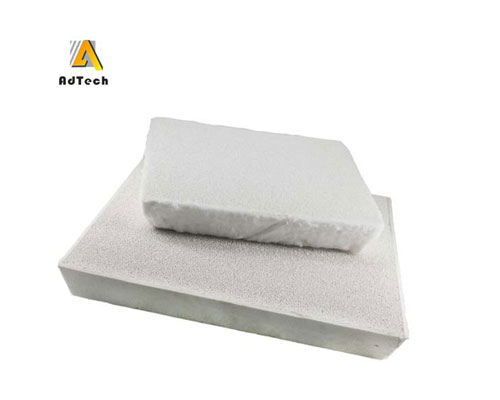 In one type of conventional continuous casting operation, aluminum or an alloy thereof is melted in a furnace and transferred via other receptacles to the pouring tundish of a continuous casting machine. Entrained within the molten aluminum are oxides of other metals existing as impurities, non-metallic oxides and other solid contaminants in particle form, such as, for example, finely divided particles of aluminum oxide which forms on the surface of the molten aluminum.

In addition, gaseous products, particularly hydrogen gas generated by reaction of the molten aluminum with moisture in the various receptacles of the system and in the surrounding environment, are commonly entrapped or dissolved in the molten aluminum. If not removed from the molten metal prior to the casting thereof, both the particulate matter and the gaseous products may contribute to undesirable voids and inclusions in the cast metal.

When the cast metal is subsequently worked to produce a final product, such as continuously formed rod and wire, the inclusions and voids frequently cause flaws resulting in breaks and fissures in the worked product, poor mechanical properties and a reduction of the electrical conductivity of the final product.

Alumina ceramic foam filter for aluminium casting plays a very important role in the aluminum liquid purification system. It is a porous refractory filter. The ceramic filter for foundry can effectively remove the large inclusions in the aluminum liquid and effectively reduce the micro inclusion size of the micro inclusions, improving the surface quality and product performance.