Aluminum melt flux cleaning process can be combined with rotary gas purging. In this process, the best degassing, oxide removal and slag reception with low aluminum content are ensured.

In the absence of aluminum melt flux, this rotary treatment is less effective for the removal of oxides and results in the formation of slag with high aluminum content.

When aluminum solidifies, the solubility of atomic hydrogen in it decreases sharply. As a result, the hydrogen atoms in the molecule are bound to the hardened metal bubbles.

Water in the atmosphere reacts with molten aluminum to form an oxide film and form hydrogen atoms between aluminum atoms. The oxides not only remain on the surface, some of them fall into the melt, and some of them have hydrogen bubbles as the temperature drops.

During casting, the oxide film on the surface of aluminum is. Some oxides fall into the melt. These oxides can be in the form of films with very high length and width to thickness ratios. Some of these films may contain aluminum inside water droplets.

Isolated hydrogen blistering occurs on the internal defects in the melt and lattice of aluminum. Therefore, oxides act as bubble nuclei. 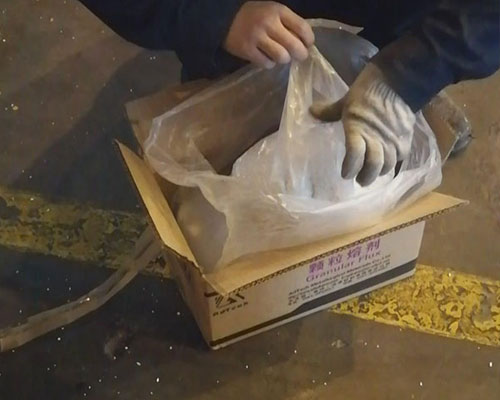 It can be removed by treating the flux in molten aluminum. Fluoride based fluxes can bind oxides. The interfacial tension between metal oxides is significantly higher than that between oxides and fluoride. The fluoride and oxide then form a mixed phase because the low-energy states of the fluoride and oxide “stick” to the oxide and cover them, and aluminum is separated from the mixed phase of these oxides.

Aluminum melt fluxes containing fluoride are injected into the melt and fully mixed. The flux encapsulates oxides and fluorides, and then forms a mixed oxide phase. This leads to disintegration into individual oxide blocks. These debris oxide mixtures have the ability to float because their density is much lower than that of molten aluminum. This results in slag with low metal content. Note that the density of pure oxides is almost equal to the density of the melt, so they have little chance to appear.