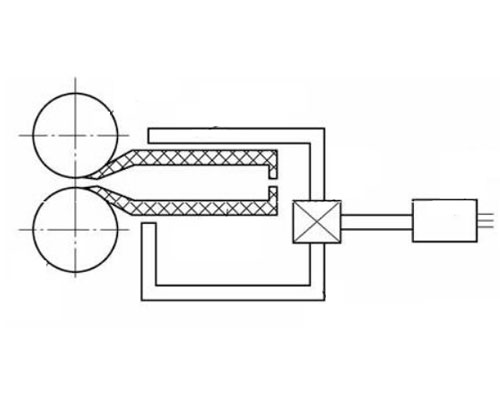 The mechanism of the electromagnetic field applied to the melt in the casting-rolling zone can be described as:

On the one hand, the electromagnetic force inputs external electromagnetic vibration energy to the melt, which intensifies the fluctuation of the internal energy of the melt and promotes the homogeneous nucleation of the metal. On the other hand, under the action of electromagnetic induction force, the growing dendrites or columnar crystals are broken and peeled off by mechanical shearing and vibration impact of the melt with a certain flow rate, and the broken dendrites enter the melt. If it is not melted and suspended in the melt, it will act as the center of mass for crystal nucleation, forming more crystal nuclei, and promoting the growth of crystal grains. Furthermore, due to the electromagnetic force accelerating and changing the motion state of the melt, the high-temperature melt far from the solidification front and the low-temperature melt near the solid-liquid interface containing a high solid percentage are forced to exchange, which changes the solidification front The flow field, temperature field, and concentration field reduce the temperature gradient of the melt and reduce the concentration difference, so that the temperature and concentration of the entire solidification crystallization area are more uniform, resulting in the nucleation and crystallization at the same time starting, proceeding, and ending in a larger range. Conducive to grain refinement and elimination of segregation. At the same time, due to the action of electromagnetic force, the internal convection in the melt is strengthened, and the particles in the melt are converted from low-speed laminar flow to high-speed turbulent flow, so that the fragments shed from the solid dendrites rapidly diffuse into the melt at the solidification front, forming The dynamic process of crystal breaking, stirring and crystallization leads to equiaxed columnar crystals in the early stage, and finally achieves the purpose of destroying directional crystallization and strengthening dynamic crystallization, achieving significant grain refinement effects.