AdTech is an enterprise specialized in new material development and high precision online molten aluminum purifying units production since 2012, got positive feedback from the domestic and overseas markets. Molten aluminum purifying units mainly include degassing unit and filtering equipment. They are installed between furnace and casting equipment, mainly used in the aluminum foundry and cast house. 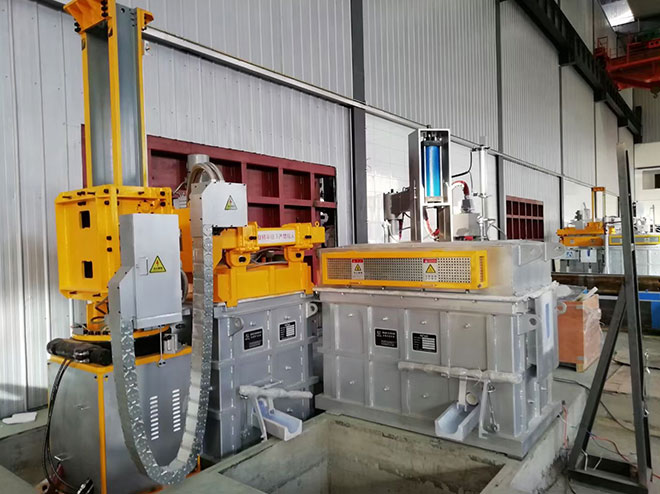 As we all know, molten aluminum casting alloys have two inherent characteristics: the tendency to absorb hydrogen and the ability to be easily oxidized.

When molten aluminum comes into contact with air, an oxidation reaction occurs. The hydrogen generated by the reduction of water is decomposed into atomic form on the surface of the melt, and then diffuses through the amorphous aluminum oxide film, and then is quickly dissolved by the molten pool. The aluminum oxide film is an inherent part of the melting process. They protect the metal under the film from further oxidation.

Once the molten metal is drawn from the melting furnace into the conveying ladle, the molten flow will not only be disturbed (from the beginning to the end), but also a large amount of splashes will be generated between the molten flow and the rising metal. The surface will promote the oxidation of aluminum and make the melting The surface of the pool thickened due to wet slag. According to reports, the aluminum content of wet dross is usually around 60% to 85%, while the remaining 40% to 15% is aluminum.

The amount of liquid metal captured in the slag varies according to the melting and processing melting method. Alumina is a very stable compound that cannot be reduced to aluminum under normal melting conditions. However, through proper fluxing and slag removal technology, the content of suspended metals can be reduced from 60% to 85% to 30%.

Molten aluminum purifying units are installed between furnace and casting equipment, they are used to solve the hydrogen degassing and slag removal. The micron level impurities in molten aluminum can be removed by this unit with our related technical guidance. Online degassing system and filtering equipment can meet producing high-precision aluminum requirements. They are used for aluminum alloy casting in rail transit, micron foil, PS plate in printing industry.