Ceramic foam filter for aluminum can be used in various casting alloys, and the product has been commercialized. This kind of filtration process has been widely promoted in industrially developed countries, and it has become the simplest and most effective method to improve the mechanical properties of castings and reduce pores and inclusions. 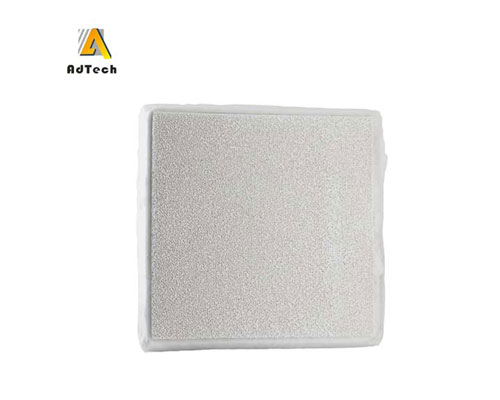 The following is the use effect of ceramic foam filter for aluminum.

The engine cylinder head is an important casting with complex structure and thin wall, which requires sealing, so the pouring temperature is higher than that of ordinary castings, and the inclusions are not easy to accumulate under the same conditions. In the past, although many slag-retaining measures were designed in the gating system, such as closed, flow blocking devices, etc., the waste rate of slag, sand, and holes remained high at around 12%. After the filter is used, the pouring time is stable, the leakage phenomenon is significantly reduced, and the waste rate of slag, sand, holes, etc. has stabilized below 3% in the past few years.

Non-metallic inclusions destroy the continuity of the metal matrix and produce stress concentration at the edges of the inclusions, thereby reducing the mechanical properties. The inclusions distributed on the grain boundaries are prone to intergranular fracture.

Simplify the pouring system and improve the utilization rate

In the production of spheroidal aluminum castings, when spheroidizing agent or inoculant is added, due to poor particle control, or extremely uneven composition, or when the temperature of aluminum water is low, segregation is easy to occur. In the past, a closed gating system was generally used to increase the height ratio between the runner and the inner runner, and the method of lengthening and enlarging the runner was used to solve the problem of unmelted particles “Freeze” in the gating system.

The use of a filter can filter out scattered and fine slag particles without having to consider the design of a complex structure. The pouring system can be greatly simplified, so that the area of ​​the pouring system on the template can be greatly reduced, which is advantageous for the layout of the template, and originally only 4 appearances can be placed You can put 1-2 more. The yield rate and process yield rate of castings can also be improved.