Using Al-Ti-B or Al-Ti-C for refining treatment, adding 0.2%, the grain size can be refined from about 80um to 20um. Modification of Al-Si alloys began in 1920, but the disappearance of Na is faster, and the loss of metal is greater; it is difficult to degas without deterioration. These shortcomings limit the use of Na. In recent years, strontium (Sr) modifiers have been developed to overcome these technical difficulties related to Na deterioration. As the preferred modifier of Al-si alloy, the use of Sr has been miraculously increased, especially in the low-pressure casting industry. The effect of Sr is similar to that of Na, which can change the eutectic silicon from needle-like to fibrous, and has a long-term effect. 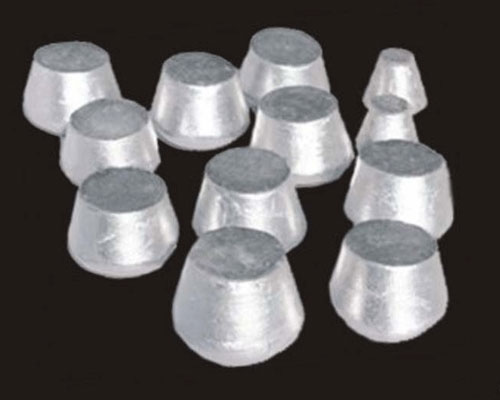 Some people thought, Sr is easy to inhale, causing surface defects such as pinholes in castings, so it is not an ideal modifier. The antimony (Sb) modified Al-Si alloy has better mechanical properties such as tensile strength and elongation after heat treatment than Strontium Modifiers. Sb modifier has a limited effect on the formation of eutectic silicon. It can only change eutectic silicon from needle-like to lamellar, but its existence in the melt is permanent. There have been quite a lot of studies on the deterioration of Sb, and there are different opinions on the mechanism of its deterioration. However, there is a common understanding that there is little convincing basis for the direct effect of Sb on eutectic silicon during the deterioration. In the study of antimony modifiers, it is found that the element Mg has an stimulating effect on the modification of Sb, and experiments have shown that this stimulating effect has a significant promoting effect on the mechanical properties of aluminum-silicon alloys.