The use of a chlorine-containing reactive fluxes, for the purpose of the removal of alkali elements (Na, Ca, K, Li), is a well established practice in the treatment of molten aluminum. Under equilibrium conditions, the respective chlorides of these elements are produced as reaction products. With the exception of LiCl, all of these halide salts, as pure species, are solid at normal treatment temperatures and thus are easily separated to the melt surface as a supemate and are removed by skimming.

Alkali elements are usually present at melt concentrations less than 500 ppm. According to the law of mass action (reaction rate approximately proportional to the concentration of reacting species), non-equilibrium metastable salts such as AlCl3 and MgCl2 (if Mg is present) are generated. These halides are undesirable because they contribute significantly to process airborne emissions. Further, MgCl2 melts at 1306° F. and is typically molten at normal melt treatment temperatures. Molten salts are highly undesirable because of the difficulty of removing them to the surface for skimming. Thus, it is highly desirable to react or complex the alkali elements to produce higher melting salts which in solid form are more efficiently separated by flotation to the surface. 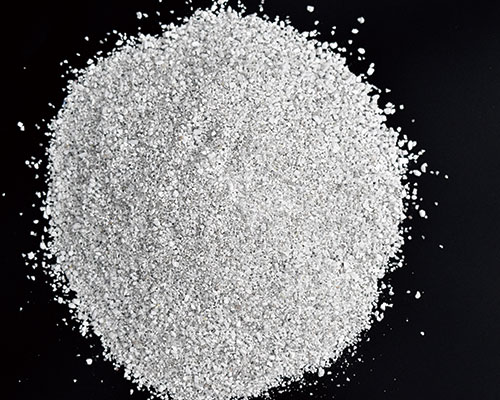 AdTech granular fluxes of PM05、PM06 are used for the removal of alkali elements (Na、Ca、Li), it is also used for refining and cleaning inside furnace for precision casting of aluminum alloy. It has the advatages of smokeless refining,zero emissions of fluoride, low dosage, it could control the chemical reactions of burning.

Granular flux consists of binary salts of anhydrous chlorine salts and other compounds. It has the particle diameter of 0.8-3.15mm, can decompose quickly at 450 ℃, and, become liquid in aluminum liquid quickly, react with the liquid contact area, make the aluminum slag fully separated with aluminum liquid and remove hydrogen and alkali metals such as Na, Ca, Li, etc. to improve the purity of aluminum liquid and raise the casting quality.