Aluminum and its alloys oxidize readily in both the solid and molten states to provide a continuous self-limiting film. The rate of oxidation increases with temperature and is substantially greater in molten than in solid aluminum. The reactive elements contained in alloys such as magnesium, strontium, sodium, calcium, beryllium, and titanium are also factors in oxide formation. In both the molten and solid states, oxide formed at the surface offers benefits in self-limitation and as a barrier to hydrogen diffusion and solution. Induced turbulence, however, results in the entrainment of oxide particles, which resist gravity separation because their density is similar to that of molten aluminum. Fluxes for Oxide Separation can also be used to minimize oxide formation. For this reason, melts containing magnesium are often protected by the use of salts that form liquid layers, most often of magnesium chloride, on the melt surface. These fluxes, termed covering fluxes, must be periodically removed and replaced. Carbon, graphite, and boron powder also effectively retard oxidation when applied to the melt surface. 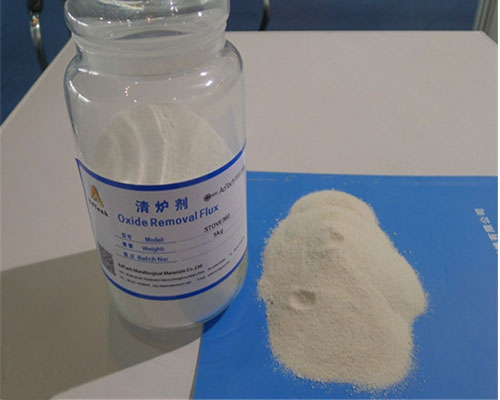 Oxides are formed by direct oxidation in air, by reaction with water vapor, or by aluminothermic reaction with oxides of other metals, such as iron or silicon, contained in tools and refractories. Aluminum oxide is polymorphic, but at molten metal temperature the common forms of oxide encountered are crystalline and of a variety of types depending on exposure, temperature, and time. Some crystallographic oxide forms affect the appearance and coloration of castings, without other significant effects.

It is usually necessary to treat melts of aluminum and its alloys to remove suspended nonmetallics. This is normally accomplished by using either solid or chemically active gaseous fluxes for oxide separation containing chlorine, fluorine, chlorides, and fluorides. In each case, the objective is the dewetting of the oxide/melt interface to provide effective separation of oxides and other included matter and the flotation of these nonmetallics by attachment to either solid or gaseous elements or compounds introduced or formed during flux treatment.