Increase the gap on nozzle and rolls, optimize the nozzle flow pattern, help eliminate the longitudinal streak defects, and improve the surface quality of the cast-rolled strip. 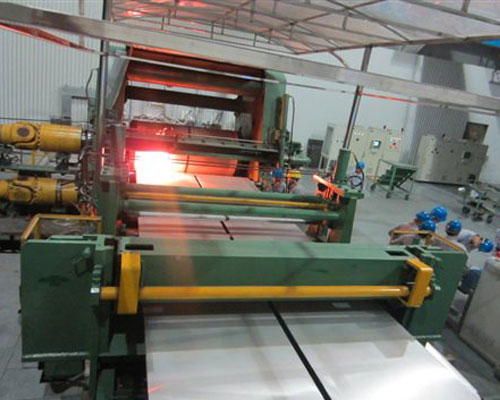 By increasing the gap on nozzle and rolls, and optimizing the nozzle flow pattern, the longitudinal stripes on the cast-rolled plate surface are reduced or eliminated. The size of the caster tip and nozzle gap has a great influence on the generation of longitudinal stripes. In normal production, due to the assembly error of the nozzle or the poor quality of the nozzle, the gap between the nozzle rollers is too small or partially uneven, and the nozzle is ground after the roller and the nozzle contact. Inclusions such as powders and aluminum slag during the casting and rolling process will accumulate at the outer front end of the mouthpiece. When the aluminum liquid passes through, the crystallization conditions here are significantly different from the crystallization conditions at other places. An obvious structural difference is formed on the surface of the rolled coil due to different crystallization conditions. If this difference is serious, it will produce sliver defects, if it is slight, longitudinal stripes will appear. After the longitudinal stripes are generated, stripes will be printed on the same position of the roll. And gradually form a small, uneven sticky aluminum strip along the circumference of the roll. Due to the interaction between the roll and the cast-rolled coil, the longitudinal stripes are difficult to eliminate online, sometimes running through the full length.