Aluminum silicate casting tip, also known as casting nozzle, is a key component to transport and distribute metal body directly to casting roll during continuous casting and rolling. It consists of upper and lower fans, several gaskets and side ears.

Aluminum silicate casting tip is a refractory board made of ceramic fiber and silicon aluminum fiber by vacuum pressing. It is a light fire-resistant product with the following properties: good stability under high temperature; good thermal insulation; low thermal conductivity; good thermal shock resistance; does not react with molten metal and can resist metal corrosion; it has good processability and can be processed at will. 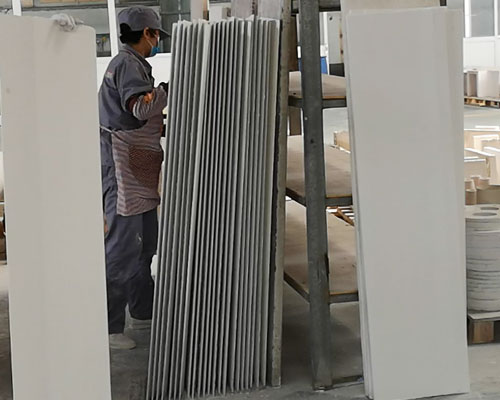 The internal structure of the feed nozzle is very important for the stable production of the casting and rolling parts and the improvement of the quality of the cast rolling plate. The requirement of the inner cloth is to make the temperature field and flow field of the metal in the feed nozzle as uniform as possible. The size, spacing and number of gaskets are determined by different nozzle structures and widths.

Make mouth fan. Since the solidified metal will have a certain width after rolling, the width of the processed mouth fan should be 5-100 mm smaller than the required plate width according to the chamfering of edge ear and alloy composition. The end faces on both sides of the fan after machining should be perpendicular to the bottom end face, and the end faces on both sides should be flush to ensure that there is no gap between the side ears.