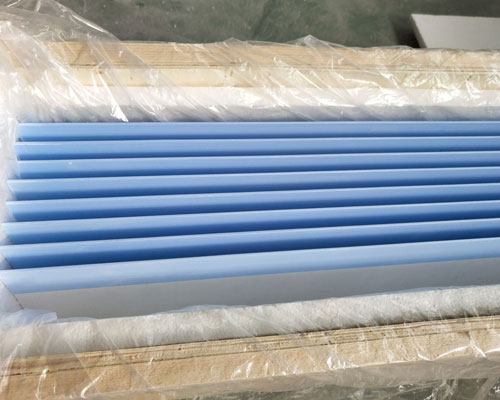 The caster tip nozzle is made of aluminum silicate felt and boron nitride. It has the characteristics of good heat preservation, high temperature resistance, small thermal expansion coefficient, no chemical reaction with liquid metal, no bubble and oxide slag.

The feeding system refers to the upper and lower plates of the feeding nozzle and the choke dam, which are fixed and adjusted with big head nails, placed in the heating furnace at 250 ~ 300 ℃ for more than 4 h. when in use, the feeding nozzle is taken out from the tool heating furnace, and the feed nozzle is assembled with the chassis on the working site, and the flatness and total opening thickness of the nozzle are adjusted by two rows of screws on the pressing plate, Then install and fix the heated runner and front box on the chassis.

When the feeding nozzle is used, when the metal flow enters from the entrance, it flows to both sides and flows to the secondary channel due to the obstruction of the first stage blocking dam. After entering the third stage channel, the aluminum liquid flows out from the third stage channel under the action of the third stage blocking dam. Due to the same static pressure, the flow velocity of metal is almost the same. The metal temperature distribution in the whole nozzle cavity is also more uniform, and the difference between the temperature of liquid aluminum in the middle of the nozzle cavity and that on both sides of the cavity is obviously reduced. In the actual production, it is observed that as long as the liquid level of the front box reaches a certain value, the time (i.e. flow speed) of metal flowing out of the feed nozzle is approximately the same, and the metal flow is more stable and orderly.

When the liquid metal contacts the roll surface, the heat transferred to the roller is basically the same, which makes the roller not have large local thermal crown during the whole deformation, and can form a good parabola shape, which ensures that the cast rolling strip has a good shape.