The pouring system includes a front box, a feed nozzle and an intermediate connecting pipe, which are mostly installed on a bottom plate. There is a fine adjustment mechanism on the bottom plate. When assembling, adjusting this mechanism can make the distance between the feed nozzle and the roll gap reach the expected deviation. The assembly quality of the feed nozzle not only directly affects its service life, but also greatly affects the quality of the strip. 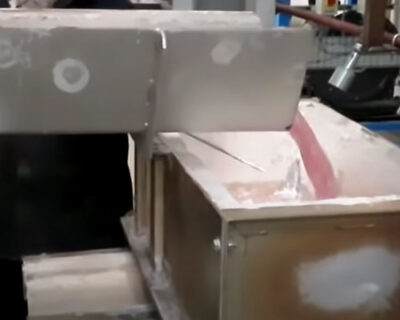 The front box is also called the tundish. Its outer shell is made of steel plate and is lined with refractory materials such as silicate anchor clay or asbestos. Its basic function is to control the pressure of the aluminum melt flowing from the feed nozzle into the casting roll gap, that is to say, the melt in the front box must maintain a relatively stable level. The level of melt in the front box varies with different types of metals, different strip thicknesses, and different pouring temperatures and speeds. For the double-roll vertical casting-rolling mill, the level of the melt in the front box should be 3-5mm higher than the centerline of the casting-rolling. This level is usually controlled by a float plug and a lever float mechanism.

In the production of cast-rolled strip, the feed nozzle is a very important part. Through it, the aluminum melt is fed into the casting roll gap, which directly affects the quality and output of the strip. Therefore, the structure and material requirements of the feed nozzle are very high.

The feed nozzle structure is divided into two types: wide type and narrow type. Its structural form plays a key role in stabilizing the process and improving the quality of products. The structure of the feed nozzle should ensure that the flow of the melt is reasonable and there is no dead zone; the melt is evenly distributed over the entire length of the roll gap and the temperature at which the melt enters the roll gap should be uniform. The feed nozzle is assembled from several pieces. A block of a certain shape is arranged between the two upper and lower aligned pieces to ensure that the melt can be evenly distributed in the entire cavity of the feed nozzle.

The properties that the material used to make the feed nozzle should have are: stable chemical properties, strong thermal insulation, low thermal expansion coefficient, good resistance to temperature changes, easy processing, and sufficient strength and rigidity.