The nozzle blades of the degassing equipment play an important role in the efficiency of hydrogen removal. It can collide and break the bubbles to make the bubble size smaller, and at the same time use centrifugal force to scatter the bubbles and disperse them evenly, reducing the probability of bubbles merging and improving the effect of hydrogen removal. 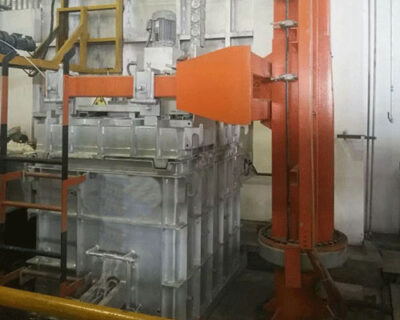 Gas flow is an important parameter for removing hydrogen from aluminum melt. To achieve a certain hydrogen removal effect in a molten pool with a capacity of about 60t, there must be sufficient gas injection speed. The greater the gas flow, the higher the efficiency of hydrogen removal. However, the air flow cannot be increased without limit. If the gas flow is too large, there will be too many bubbles in the reaction chamber. Relatively speaking, the amount of molten aluminum to be processed becomes gas and the contact time for liquid is shortened. At the same time, when the air flow is too large, the upper and lower convection of the aluminum liquid is intensified, so that the bubble staying in the aluminum melt is greatly shortened, thereby reducing the hydrogen removal effect. For this reason, in actual production, in order to reduce the influence of the upper and lower convection, To improve the gas utilization rate, excessive gas flow should be avoided as much as possible. It is difficult to increase the hydrogen removal efficiency by increasing the gas flow rate alone. The gas flow rate should be controlled so that the aluminum liquid level does not turn over.