The inert gas used for degassing in the industry should be a gas that is insoluble in liquid metal and does not react with metal, such as nitrogen and argon used in aluminum alloy smelting. It is non-toxic, non-corrosive to equipment, and non-toxic. Pollution of the environment, convenient and safe operation. The purity of the inert gas introduced into the melt should be high. 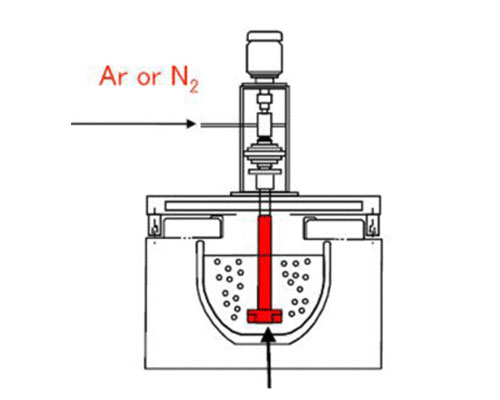 The effect of the gas degassing method is also related to the way the gas is introduced. Experiments have shown that if the bubbles formed by the introduced gas escape the surface at a straight rate, it will cause splashing of the molten metal and destroy the integrity of the vaporization film or coverage of the liquid surface. If the bubble rises too fast, it will form a chain, which will reduce the contact area between the bubble and the metal. If small-diameter non-chain bubbles are formed, it can strengthen melt stirring and increase the contact surface between bubbles and metal. In addition, the small-diameter bubbles have a slow floating speed and a long residence time in the metal liquid, which increases the chance of adsorbing gas, so the refining effect is good.

Flux degassing is easy to produce slag and harmful gas, and metal loss is also large. Therefore, some non-toxic mixed fluxes have recently been developed, such as using chloride salt and carbon, and then adding a small amount of hexachloroethane, cryolite powder, refractory powder, etc., after drying, sieving, mixing, and pressing into blocks, which are sealed and packaged for later use.

The boiling degassing method uses the principle of the partial pressure difference between the inside and outside of the vapor bubble generated by certain metals in the smelting process to degas.